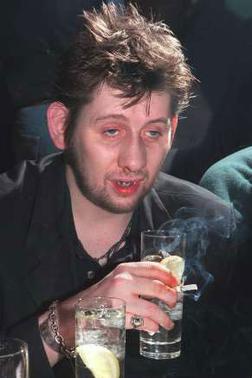 There was a time when everyone in the music business was drunk 24 hours of every day. It’s sad to see that some pretty boys without talent seem to have taken over from the real rock stars. Well not Shane MacGowan. This Irish singer may not be capable of giving interviews plenty of times or even finishing a concert. His drinking skills we respect very much. Therefor it’s time for a homage to one of the biggest drinkers in the music industry.

During his career MacGowan was also addicted to heroin, but thank God he found his way back to the social drug alcohol. Most concerts he actually performed great while being completely wasted. However at some occasions he also failed in this matter. The other band members of The Pogues often locked him up in his hotel room to keep him more or less sober until the concert. In Holland he once tied his sheets together to escape in the classic prisoner style to get drunk in the nearest bar.

As an excuse to put this post in the quotes and sayings category let’s start off with a typical MacGowan quote: “The most important thing to remember about drunks is that drunks are far more intelligent than non-drunks- they spend a lot of time talking in pubs, unlike workaholics who concentrate on their careers and ambitions, who never develop their higher spiritual values, who never explore the insides of their head like a drunk does.”

Another great quote that describes both his lifestyle as his indestructible shape: ,,The British press have been giving me six months to live for in the past twenty years. They must be getting pissed off interviewing me by now.”
After a long career of acting, singing and above all drinking, MacGowan (born in 1957) is still going strong. For the fans he’s a living legend. Since it’s never quite certain if he’s capable of performing. His concerts are a bit of a gamble; either it’s a great musical performance or you’re witnessing a classic example that the rock ‘n roll lifestyle still exists.

Any guy who goes to an interview like this, is awesome in our book:

More drinkers that left their mark on the world’s history.

9 thoughts on “Shane MacGowan, a musical genius or a mumbling drunk on stage”